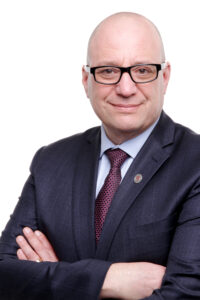 According to Forbes, leadership is a process of social influence, which maximizes the efforts of others towards the achievement of a goal. Having a leader with a tremendous wealth of experience and a long history of success in the corporate world in the Executive Director’s position of the Hellenic Community of Greater Montreal (HCGM) can only improve our Community and its transition to the 21st century. It is with this in mind that we announce the appointment of Denis Kotsoros as the new Executive Director of the HCGM.

The HCGM conducted a rigorous selection process in which numerous candidates from varied backgrounds were assessed for the role. We are pleased that this has resulted in the hiring of such an accomplished and dynamic individual. With a considerable record of proven financial leadership within successive senior roles, Denis is bringing a breadth of knowledge and experience in change management to the organization. In his new role, he will manage and administer the day-to-day activities of the HCGM and assist in setting and achieving the HCGM’s mission, goals, and objectives.  As the most senior member of the organization, all departments of the HCGM will report to him. Denis will assume his responsibilities on January 31.

Born and raised in Montreal by Greek immigrants, Denis holds a Bachelor of Arts Degree in Political Science and History from McGill University, specialization in Construction Management from New York’s Columbia University, a Certificate in Accounting from McMaster University (Hamilton, Ontario), and Construction Engineering and Management Certificate from University of Michigan (Ann Arbour, Michigan, USA). Denis has been Regional Operations Director for Eastern Canada with Corrosion Service for more than ten years. His long list of accreditations includes Chief Security Officer Status with Public Works and Government Services Canada, Member of Project Management International, Member of the American Society for Quality, Accredited Disaster Relief Coordinator for the Canadian and International Red Cross.

Please join us in welcoming Denis Kotsoros to the HCGM and in wishing him the greatest success in this new role.