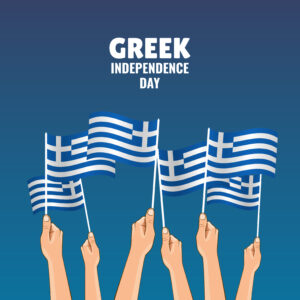 The HCGM annual Greek Independence Day Parade will be held on Sunday, March 27th, 2022, at 1:00 p.m. in the Parc-Extension borough. The spectators will attend this unique annual event where Montrealers of Greek descent will patriotically wave their Canadian, Quebec and Greek flags and show their colours with great pride. The Parade will showcase many groups, including all HCGM Schools and Departments, Greek associations, educational institutions, and various cultural communities. The groups will consist of 10 to 12 people to respect the current health guidelines.

Greek or not, bring your flags and get ready to pay tribute to the history, the heroism and the independence of the nation that started it all. The HCGM continues the more-than-40-year-old tradition of organising a series of commemorative events whereby Montrealers celebrate Greek Independence Day:

Friday, March 25nd at 19:00: – Official Dinner at the “Salle Quebec” of the Hellenic Community Centre Adrian Maris 5757 Wilderton Avenue. During the dinner, the HCGM will present the “Hellene of the Year” distinction to a Greek nominee in recognition of their social contribution and scientific and business successes.

Saturday, March 26rd at 13:00: – Laying of the Wreath Ceremony in front of the Cenotaph of the City of Laval, 1 Place du Souvenir.

At 13:00 – Greek Independence Day Parade on Jean-Talon and Hutchinson.

Numerous philhellenes and officials from the Federal, Provincial and Municipal governments will attend the events.