Responding to local and global realities in Montreal’s Greek community

Dr. Caroline Riches is an Associate Professor in the Department of Integrated Studies at McGill University. She is the Director of Teacher Education Programs & Certificates and MA programs in the department. Her research interests are in teacher education & development (Collaboration in Haitian Teacher Development: Cultivating Inclusive Action Research Practices) and bilingualism (Toward Achieving Canadian Bilingualism: Investigating Pre-service ESL and FSL Teachers’ Linguistic and Professional Identities).

Teaching Greek: Three years ago we, as B.Ed. program directors at McGill, were approached by a professor in the department of History and Classical Studies who described a need in the Montreal Greek school community for Quebec certified teachers of Greek language and culture. The need is tied to an evolution of the Hellenic communities in Montreal, Quebec and North America and also to the recent economic situation in Greece. We were charged with investigating the possibility of creating a pathway in our teacher education programs for the preparation of such teachers for the Montreal Greek school community. Long story short, we have created an option in our B.Ed. TESL program with an emphasis on Greek language and culture teaching. 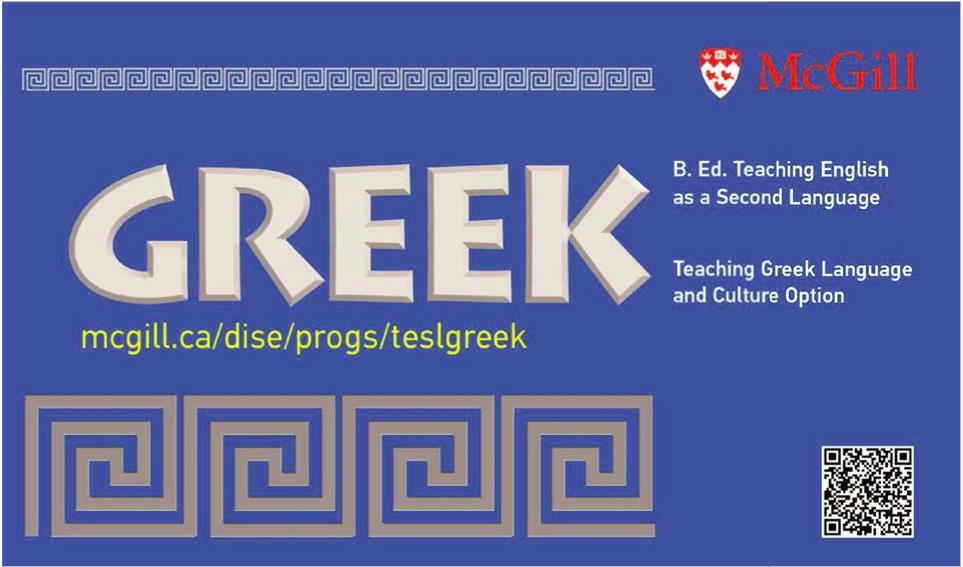 In creating and designing this option, we had to develop our own understanding of the historical, sociolinguistic, and current context of the Greek community in Montreal – which is fascinating! particularly with respect to heritage language maintenance and identity.

The Greek force:  Greeks have traditionally been one of the strongest ethnic groups in Canada, and stronger in Quebec than anywhere else in the country (Gavaki, 2009). Although there has been immigration from Greece to Canada since the mid-19th century, the most significant increase was post-World War II, between 1945 and 1971, when almost 110,000 Greeks immigrated to Canada, mostly to Montreal and Toronto. There has been an increase again since 2000 (Gavaki, 2009). This has resulted in a vibrant and sustained Greek community in Canada (Georgiou, 2008). In Montreal specifically, the Hellenic community of Greater Montreal was formed in the early 20th century, and though a number of services were offered, perhaps the most significant in terms of ethnic group vitality (Holmes, 2008) were the establishment of Greek Orthodox churches and the creation of a consortium of semi-private elementary day schools. École Primaire Socrates was established in 1926, and currently consists of five campuses and 1400 students. A secondary school opened in 2016. 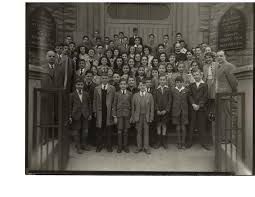 Pillars of language maintenance:  Language shift and loss in minority immigrant populations is a common consequence of moving to a new country and often occurs in only a few generations. Economic, social and political factors as well as the size of the immigrant community all contribute to the speed at which language shift and loss occur. The ethnolinguistic vitality of a community is often determined by its status, size and institutional support (Holmes, 2008). The Greek community, particularly in Montreal, has been resilient in this regard. Until about 1991, Greek-born immigrants outnumbered Canadian-born Greeks in the Greek communities in Canada. Since then, however, Canadian-born Greeks have constituted the majority of Greek-Canadians. This movement has brought about radical changes in the Greek communities in Canada and signs of language shift are evident (Gavaki, 2009).

Greek schools and the Quebec education system, a.k.a. language politics:     In 1971–1972, partially in response to the political situation in Quebec, a curricular change occurred in the Socrates-Démosthènes Greek school system, resulting in trilingual French-English-Greek programs. In 1998, the Quebec school system reorganized from a religious to a linguistic (English and French) division and the Socrates schools joined the French Private School network, with extended hours to include English as a Second Language (ESL) and Greek language and culture (Maguire, 2010). Through this Greek school system, second and third generation Greek-Quebecers maintain advanced levels of Greek language while becoming proficient in both French and English. Traditionally, the Greek teachers have been either first or second-generation Greek-speaking immigrants with a general education degree, or Greek national teachers seconded to the Socrates-Démosthènes schools.  Over the last few years, due to the economic crisis in Greece, this group of seconded teachers has been reduced and has, to our understanding, now been cancelled altogether. At the same time, the pool of local teachers is declining due to changing demographics in the Greek community (fewer first-generation immigrants, and fewer fluent heritage language speakers among the 2nd and 3rd generations). In addition, the Quebec Ministry of Education is increasingly requiring that all teachers obtain Quebec teacher certification (Riches, Benson & Wood, 2013). These changes with regard to the availability of teachers of Greek risks affecting the quality of Greek education offered in the schools, thus the need for qualified and Quebec certified teachers of Greek.

Greek and TESL:  The unique language curriculum of the Socrates-Démosthènes schools (as these are designated as French schools and offer ESL and Greek Language and Culture instruction) meant that we could logically combine the preparation of teachers for Greek heritage language with ESL and so, we were able to create a new program option – Teaching Greek Language and Culture – within the structure of our existing B.Ed. Teaching English as a Second Language (TESL) program. (Not only did this make sense, it also greatly simplified the daunting approval process!) This option includes 21 credits of Greek Language and Culture courses (offered by the Faculty of Arts), that students take along with the existing TESL required courses and field experiences. The Socrates-Démosthènes school has committed to providing student teaching placements in Greek language and ESL classes, and to recognising and prioritising the hiring of graduates from this new program option. The beauty of this design is that it makes use of courses that are already offered and that simply include the TESL-Greek option students. Thus we can accept very small numbers of students (even 2 or 3) into the Greek option.

Creating this program was an extremely rewarding and collaborative effort, and we look forward to seeing the program gain momentum!